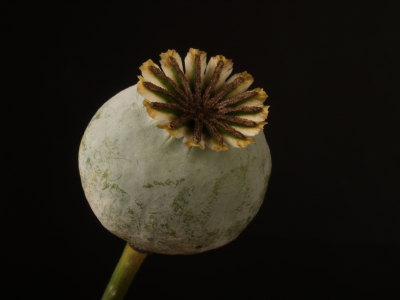 Facts about Opium:
The United Nations International Drug Control Program (UNDCP) estimates that slightly fewer than 5,000 tons of illicit opium was produced in 1997. Production in 1997 was lower than in 1994, but is still considerably higher than in 1990. The dramatic growth rates experienced in the 1980s and early 1990s, however, have given way to a certain degree of stabilization since the mid-1990s.
In terms of area under cultivation, UNDCP estimates that opium poppy cultivation in 1997 was just under 270,000 hectares, about the same as in 1990. Afghanistan and Myanmar were the main sources of increased cultivation/production over the last decade, with Afghanistan being the main source for the rise. Together these two countries accounted for about 80 per cent of global area under opium poppy cultivation and for 90 per cent of global illicit opium production in 1996-97.
The third largest producer is Laos where production fluctuated between 100-150 tons in the 1990s. Cultivation and production in Thailand and Pakistan have decreased drastically over the years and more recently Vietnam has shown a downward trend. With a combined 12,000 hectares of opium poppy, Colombia and Mexico are relatively minor global opium/heroin producers. Heroin produced in these countries is shipped to the North American market. Opium/heroin production has remained stable in both countries for several years, due mainly to vigorous opium poppy eradication policies.
Taking into account seizures of opium (210 tons on average in 1995-96) and the amounts used for domestic purposes, consumption in neighboring regions and losses in transport (in total some 30 per cent of production less seizures of opium) UNDCP estimates that about 3,300 tons of opium were available for production of heroin in 1997. Applying a 10:1 conversion rate, (opium to heroin) production of heroin in 1997 amounted to 330 tons. Less seizures of heroin (some 30 tons on average in 1995-96) about 300 tons of heroin are likely to have been available in the consumer markets.
Sources: UNDCP, Annual Reports Questionnaires; UNDCP estimates.